i have a Wreck this journal!!

yey so as the title says i got a wreck this journal out of waterstones the other day.... and will willingly admit i had never heard of them until i spotted it =]

so far i have done 2 parts of the book and thats the number pages and punch holes through several layers one.... i plan to have a picture or even a video of every completed page.... that i will evntually load on to youtube =]
Posted by That Disney Girl at 13:13 No comments:

Now you may be asking who exactly is this man, and until maybe half an hour ago I would have responded with 'I have no idea'

However, he was 21 when he died, one of the 2996 victims of the 9/11 attacks on the world trade centre. He had just began his new job, the day of his death being his second day at work,

But this blog isn't about telling you how he died, its about the person, his life, who this name amongst all the others is, this blog is part of project 2996, a project set up to remember the fallen of this tragic day, to find out more about the person behind the name and so lets begin...

In all honesty I don't really know what drew me to this particular person on the list of 1311 people who also don't have a tribute, I think what caught my eye was that he was my age when he died, so young and just starting out his life, just beginning something so new.

And so after choosing Brian I began to look for information on him, I already knew he was 21 years old, I knew his name was Brian, and like everyone else I knew of the tragic circumstances that surrounded his death, but from my researching around I have found out that Brian was known as being the good kid, the kind of kid that would be found helping someone across the street if they where struggling.

I discovered that he was a kid that grew up playing baseball, and had the nickname of slick, so called because of the way he liked to style his hair.

I found that he had chosen to become a carpenter, and that the 11th of September 2001 was only his second day at his brand new job at Certified Instillation Services, a small business set up on the 98th floor of 2 world trade centre.

From reading tributes for Brian on many websites I have mostly found that Brian was one of those people that would always be found smiling, he would always be trying to brighten someones day.

I would have liked to be able to find out more about Brian, but alas, there isn't much information on Brian other than his name, age and his place of work, and I feel that trying to contact family, or friends would be out of the question for me, having never met or even until discovering project 2996 just a few hours ago known about the young man called  Brian Patrick Monaghan Jr.

and so my final words are simply

and to note that my condolences go out to Brain's friends and family, on this say 10 years since he was called to heaven to be an angel
Posted by That Disney Girl at 20:36 No comments:

yes as said this is slightly late in coming, but better late than never.... and after all its only thursday and expo only happened less than a week ago, for those who dont know what it is i am talking about, i am blogging about the recent London MCM expo, it happened over halloween weekend, and was a fun filled weekend full of cosplay and the like.  there isnt really much to talk about when typing a blog, it would be much better to talk about it but acutally talking but alas i have not yet found the time to do a vlog on the happenings, but i can however show some photos i took while i was there and also talk about some of the things i bought while i was there.

so before going into the photos i want to first mention an artist who was present there in the artist alley, his artwork is amazing and i reccommend any transformers fan check out his art work which you can find here http://jasoncardy.deviantart.com/ as i said his art work is amazing go check it out =] and now for the photos.... 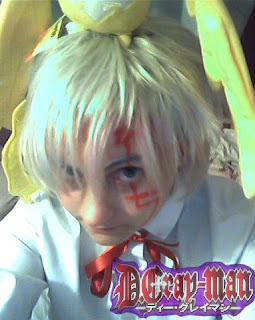 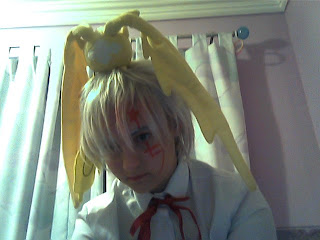 so these are of my allen walker cosplay it quickly became one of my lost liked cosplays over the weekend, there are more pictures but due to my camera being a pain at the moment i cant show them, maybe in the next blog....
so until the next blog....﻿
Posted by That Disney Girl at 17:00 No comments:

this would be my first blog.... ever! and i hope that by starting this it will get me into a habit of actually doing something worth reading, i want to get into the habit of doing blogs etc. and i would also like to start V/loging as well... havnt started it yet... but i will.... so until next time...
Posted by That Disney Girl at 15:53 No comments: